With money growing at over 50% per year, it’s no surprise that Argentines treat their pesos like hot potatoes.

Im In addition to facing an acute COVID-19 crisis, Argentina’s prison economy is collapsing and, as usual, the noose of inflation is around the necks of Argentines. Argentina’s official inflation rate for August 2020 is 40.70% per annum. And, for once, Argentina’s official rate is pretty close to the rate I calculate each day using high-frequency data and purchasing power parity theory, a methodology that has long been proven successful. compared to official statistics. Today I measure Argentina’s annual inflation rate at 37%, but probably not for long – the noose is usually followed by the trap.

As Milton Friedman put it in his 1987 New Palgrave Dictionary of Economics entry “Quantity of Money Theory” (QTM), “The conclusion (of QTM) is that substantial changes in prices or nominal income are almost always the result of changes in the nominal supply of money. The income form of QTM indicates that: MV = Py, where M is the money supply, V is the speed of money, P is the price level and y is the real GDP (national income).

Let’s use the QTM to do some bench calculations to figure out what the “golden growth” rate is for the money supply. It is the rate of growth of broad money that would allow the Central Bank of Argentina (BCRA) to meet its inflation target. I calculate the rate of “golden growth” for the last decade.

The rate of “golden growth” is illustrated in the graph below. Also included are the annual growth rates of the total money supply over the past decade, as well as the average, which is 32.47 percent. It is clear that the BCRA has far exceeded the rate of “golden growth” over the past decade. At present, the annual growth of money supply is skyrocketing to 53.71%, more than 40 percentage points higher than the rate of “growth in gold”. 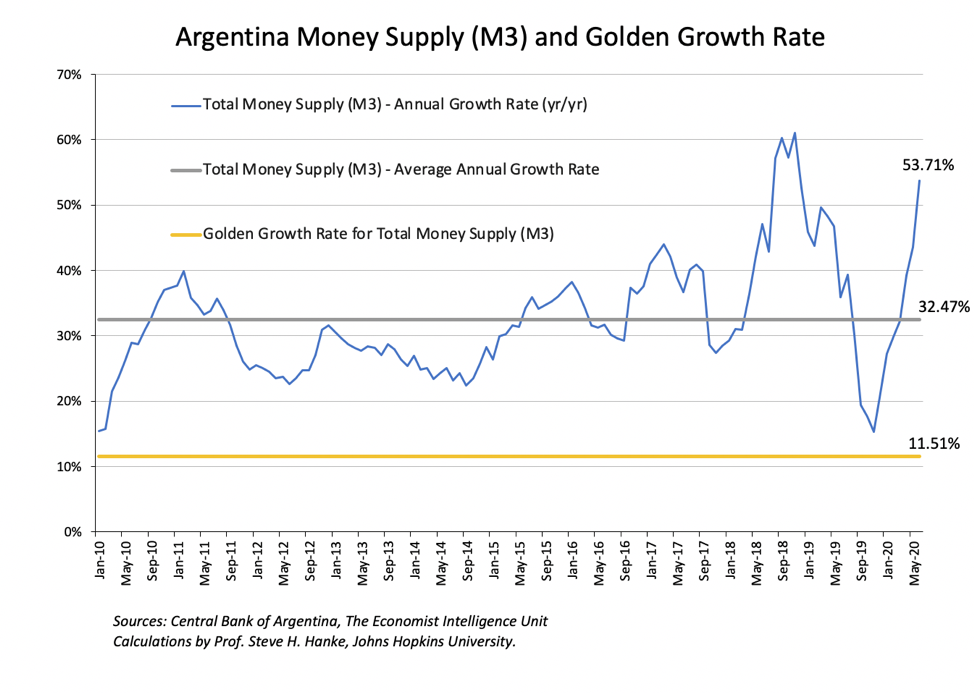 Instead of limiting the freedom of Argentines to use their preferred currency, the greenback, Argentina should put the BCRA and pathetic peso on the back burner and put them in a museum. It is time for Argentina to officially dollarize. It would be an easy task to accomplish. At the request of then President Carlos Menem, Dr Kurt Schuler and I prepared “A dollarization plan for Argentina», First published in Friedberg Commodity and Currency Commentary Expert Report (February 1, 1999).

Although Menem failed to pull the trigger on dollarization in Argentina, it was doable in 1999 and would have worked well, just like today. Indeed, it would allow Argentina to avoid the monetary chaos, skyrocketing inflation and devaluations and defaults that have plagued Argentina since 1999.